How To Strike Off A Company In Singapore 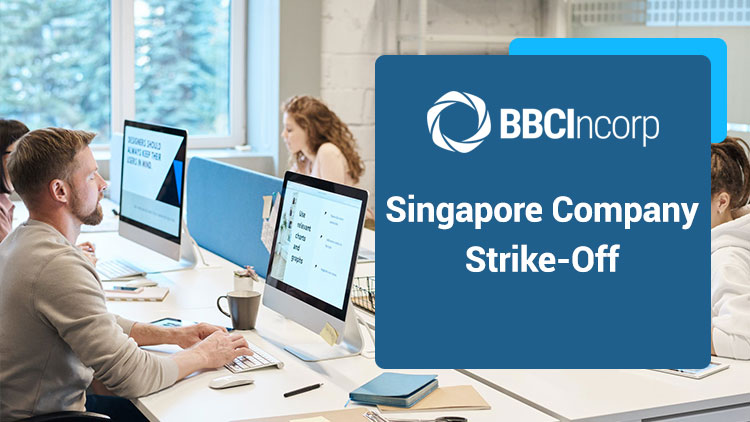 1. What Is Company Striking Off?

Striking off means deregistration of a company. The outcome is the company’s name will be removed from the Register of Companies and that business will eventually be dissolved.

Please remember that striking off and winding up are two different processes, although the final results are the same which is the dissolution of a company.

Striking off versus Winding up

Winding up is a more formal procedure that requires an appointed liquidator to convert assets into cash in order to pay off debts and then distribute the remaining value to the company’s members. In other words, winding up is the process of bringing a company to an end mainly due to indebtedness. With that being said, if your company is insolvent, meaning it is unable to pay debts, then it must be wound up but not struck off.

Meanwhile, striking off is a quicker and less-hassle procedure for a company to close down. Simpler as it seems, there are many criteria you need to meet in order to apply for striking a company off. A business can be struck off either by the Registrar, which is ACRA, on their own will or by the application from the company itself.

2. Requirements of Company Striking Off

According to ACRA, the following criteria must be met in order to strike off a company’s name:

3. Procedure of Striking Off a Company in Singapore

As mentioned above, you can apply to strike off your company or the company may be struck off by the Registrar (ACRA) on their own motion.

3.1. Striking Off on Application by Company

If the company meets the above-stated criteria, an application for striking off can be submitted online via BizFile+ with the use of SingPass or CorpPass by:

According to Section 334A of the Companies Act, unless there is an objection, ACRA will proceed to publish the company name to be struck off in the Government Gazette, which is known as the First Gazette Notification, after 30 days from the date on which the notice is sent.

This First Gazette Notification will state that ACRA is going to exercise the power to strike off the company’s name if there is no objection, within 60 days, along with reasonable evidence proving that the company should not be struck off.

Subsequently, after the expiration of 60 days, ACRA shall publish again in the Gazette, which is known as the Final Gazette Notification, informing that the company’s name has been struck off and the business will be dissolved since then. The entire process normally takes at least 4 months.

Restoration of the struck-off company is possible as long as the application for restoration is made within 6 years after the date on which the company is dissolved.

According to Section 344C(1) of the Companies Act, any interested person can deliver an objection against the striking off as long as they can provide solid proof, for example, that the company does not satisfy the prescribed criteria. ACRA shall inform the company upon the receipt of the objection.

The company shall then be given 2 months to solve the matter and if it is unable to do so, the striking-off application will be turned down. Only when the objection has been cleared can that business submit for a new application.

Pursuant to Section 344B, the applicant can at any time before the company has officially been struck off withdraw the application via BizFile+ with no filing fee charged. The Registrar will then publish the withdrawal on the Authority’s website.

3.2. Striking Off by Power of Registrar

In accordance with Section 344 (1) of the Companies Act, if the Registrar has reasonable cause to believe a company has not carried on its operation, they can start a process of striking the company off. The process is similar to that above, excluding the step of making an application, from sending notice to inform the company of the striking off to the second publishing in the Gazette after which the company’s name shall be struck off.

4. Several Notes after Company Striking Off

In short, a company can be struck off by the Registrar or can apply by itself for striking off in Singapore as long as the requirements are met. After two publication of notifications in the Gazette, the company’s name shall be struck off. In order to stop the process, an objection needs to be sent to ACRA with reasonable evidence.

Please remember that if your company is in debts and wishes to close down, it must go through a process of winding up but not striking off.

Any further related questions can be answered by our experts, talk to us now!