How To Be Exempted From Singapore Foreign Income Tax 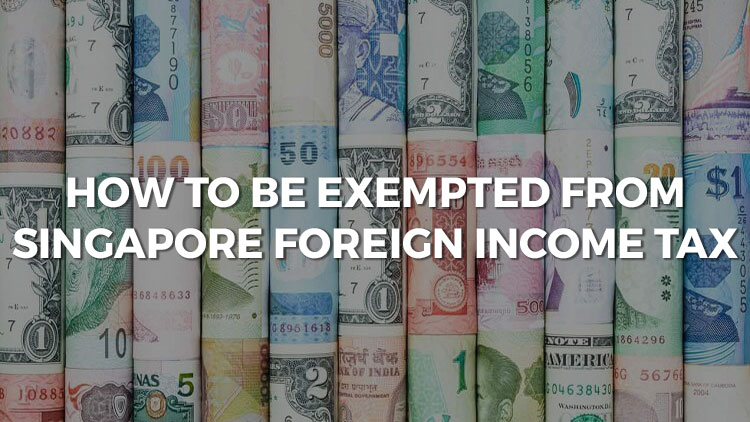 Singapore taxes on foreign income. However, to increase the competitiveness of Singapore as a business hub and enhance international trading, the government allows companies that are tax-residents to be exempted from foreign income tax when certain conditions are satisfied.

Let’s dive into how your Singapore-incorporated company can be granted such exemption!

1. An Overview of Foreign Income Tax in Singapore

As you may know, Singapore adopts a territorial basis to tax on its residents’ income. This means the income generated in or derived from the nation will be subject to taxes.

So, assume that your Singapore-incorporated company provides services overseas and receives income in Singapore, chances are it will be subject to domestic corporate income tax, currently standing at 17%.

2. Types of Foreign Income in Singapore

According to the Inland Revenue Authority of Singapore (or IRAS), foreign-sourced income is further categorized into 3 groups:

For further information, a fixed place of operation is a place of management, an office, or some space where a Singapore resident provides its service. A fixed place must have a feature of permanence. A place that is only set up temporarily for certain operations or preparation will not be considered a fixed place.

If services are not provided through a fixed place of operation, then they will be considered as Singapore-sourced income.

Let’s move to the main event. With the Singapore foreign-sourced income exemption scheme, your Singapore-based company (must be a tax-resident) can be exempted from the foreign income tax when satisfying the following conditions:

There is one circumstance in which the income is not subject to tax in the foreign jurisdiction but the “subject to tax” condition is still met. That is when the income is granted a tax exemption in the foreign jurisdiction due to an incentive for substantive business activities (carried out through professionals and involved with actual expenditure). In this case, your company should present the following documents:

Assume that your Singapore-incorporated company received a dividend from another company in another foreign nation. Below are ways to determine whether the tax on dividends has been paid in the foreign nation:

The tax on dividends has been paid in the foreign nation when:

The tax on dividends has not been paid in the foreign nation when:

You can prove that the underlying tax has been paid on the foreign-sourced dividend by supplying one of the following documents:

To meet this condition, you need to persuade the Comptroller of Income Tax that the tax exemption for foreign-sourced income in Singapore will bring benefits to certain resident taxpayers.

In case the Comptroller is not satisfied, you can still aim for other tax reliefs on foreign income, tax credits to be more specific.

There is a way for companies to be exempted from Singapore foreign income tax. That is to satisfy the 3 conditions of the Singapore tax exemption scheme for foreign-sourced income.

First, the foreign-sourced income needs to be subject to tax in the foreign jurisdiction where it arises, unless it is granted a tax exemption. Secondly, the highest corporate tax rate of such foreign jurisdiction must be at least 15%. Last but not least, the Comptroller of Income Tax must be persuaded that the tax exemption of foreign-sourced income is beneficial to Singapore-resident taxpayers.

Should you have any further questions on tax exemption in Singapore, consult our experts now!