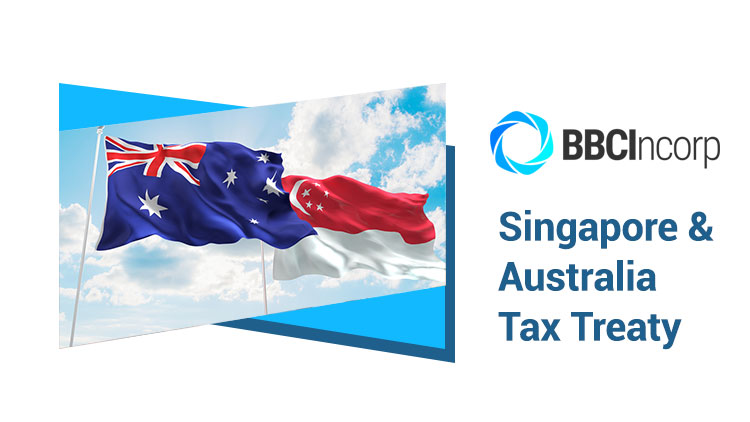 In order to push the economies and strengthen the partnership, Singapore and Australia have both signed a Tax Treaty Agreement for Avoidance of Double Taxation (DTA). Its main purpose is to prevent the income from being taxed twice when flowing from one country to the other. Moreover, for some specific types of income, DTA offers reduced rates of tax, which brings significant benefits to taxpayers or businesses in both nations.

Introduction to the Singapore-Australia DTA

Singapore has one of the most advantageous tax regimes in the world, thus there are many advantages to incorporation there. Singapore’s effective tax system is even more effective because of its extensive network of tax agreements. The Double Taxation Avoidance Agreement (DTAA), which ends the double taxation of income between Singapore and Australia and further lowers Singapore’s already-low tax rates for firms and people, was one of several accords that Singapore and Australia signed in 1969. The most recent protocol was signed on September 8, 2009, and it became effective on December 22, 2010.

Before diving into the key provisions of the tax treaty between Singapore and Australia, it is necessary for you to go through an overall review of this DTA.

The Agreement shall apply to residents of both Contracting States, which are Singapore and Australia. The word “resident” means any company and person who is resident in either the countries.

The DTA covers the following types of tax:

A permanent establishment of an enterprise is the fixed place through which that enterprise partly or wholly operates its business activities. It can be a place of management, branches, offices, factories, etc.

An enterprise is considered to have a permanent establishment in the other Contracting State if:

Key Provisions of The Double Tax Agreement Between Australia and Singapore

This section will cover some of the most important points of the DTA – tax treaty for certain income types under both Contracting States, including real estate income, profits, dividends, interest, royalties, and other types of income. 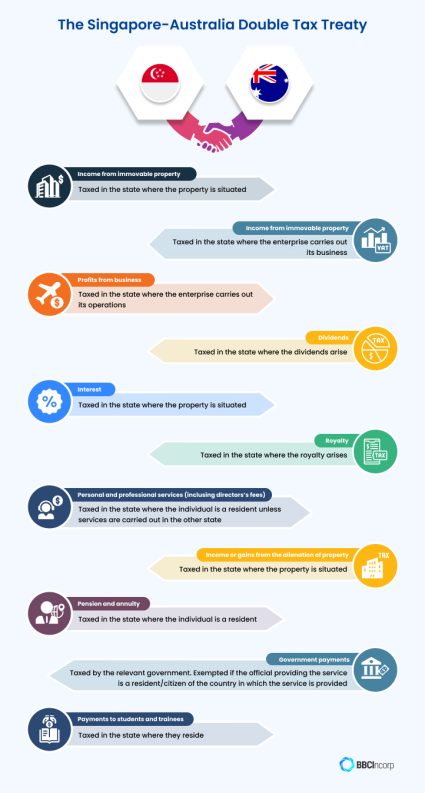 For the in-depth information, you can check the official document here

Likewise, profits from the operation of ships or aircraft received by a resident in one Contracting State is taxable only in that State. If such profits are generated from ship or aircraft operations solely in the other State, it shall be taxed in that other State.

A resident in Singapore who receives dividends from a resident company in Australia shall not be taxed more than 15% of the gross dividend amount in Australia.

DTA puts a cap on tax on interests in the country from which the interest income is generated. To be specific, a resident in one Contracting State who receives interest from the other State shall not be taxed more than 10% of the gross interest payment. The interest in this DTA includes interest coming from bonds, securities, debentures or any other form of indebtedness.

Same as interest, income from royalties is imposed with a favorable tax rate thanks to the DTA. Particularly, a resident in one Contracting State who receives royalties from the other State shall only be taxed at the 10% rate or less of the gross payment for royalties.

In addition, remuneration or income, which is received in one Contracting State from the other State, from employment exercised on ships or aircraft in international traffic is also exempted from tax.

All in all, Singapore and Australia tax treaty states that:

Should you want to read other tax treaties in Singapore, contact us if you have any further questions!