Wage Credit Scheme in Singapore: A Support For Employers 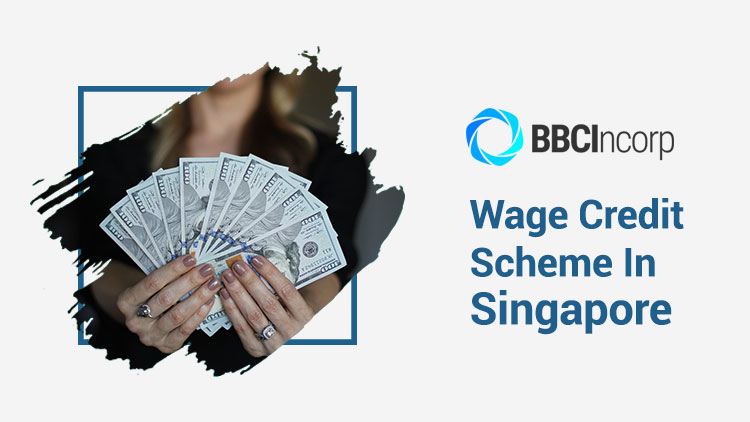 This is one of the beneficial schemes that might help you, as an employer or business owner, relieve the burden of offering incentives to your local employees (Singapore Citizens). Now, under the Singapore Wage Credit Scheme (WCS), you can increase the salary of your staff to give them motivation, with the support from the government.

If you are a new employer, get to know what it is and how it works now. The good news is you do not have to do much application.

1. What Is Wage Credit Scheme in Singapore?

Under the scheme, the government finds a way to support business owners by co-funding a percentage of the wage increases you, as an employer, pay your local staff in the preceding years. In other words, this is the scheme in which you will receive a partial reimbursement on the increased amount of salary which is paid to employees the years before.

There is no doubt that WCS brings joy and benefits to everyone. Particularly, employers actually pay less than what they pay the employees when receiving the reimbursement or claiming back a part of the payment under the Wage Credit Scheme. Also, the scheme can give you advantages to keep and retain talents in your company by offering them higher wages year-by-year.

As for employees, when getting the salary increased, they are highly likely to feel appreciated and have more motivation to work and subsequently perform better at work. Therefore, overall, this may eventually boost the efficiency of employees’ work commitment and productivity of your business as a whole.

2. Changes to the Wage Credit Scheme Over The Years

In February 2020, the Budget 2020 has announced that there will be enhancements to the Singapore Wage Credit Scheme. To be more specific:

Do you feel confused with all the numbers and percentages? Don’t worry. Let’s have one very simple example:

3. Who Is Eligible For The Scheme?

The WCS is only for eligible employers. The qualifying employers are those who give wage increases to employees who meet the following criteria:

However, the following entities are excluded from the Wage Credit Scheme:

4. How Does The Wage Credit Scheme Work?

In this section there will be more examples to help you understand how the scheme works:

*Please take note that any portion of a wage increase that brings an employee’s gross monthly wage above that amount is not eligible for co-funding.

The first thing we need to know is how to calculate the gross monthly wage of one employee:

**The total wages include basic salary, overtime and bonuses paid in one calendar year.

Wage Credit can be understood as the amount you, as an eligible employer, will receive in the qualifying year and it is calculated according to the following formula:

For better understanding, let’s look at these examples: 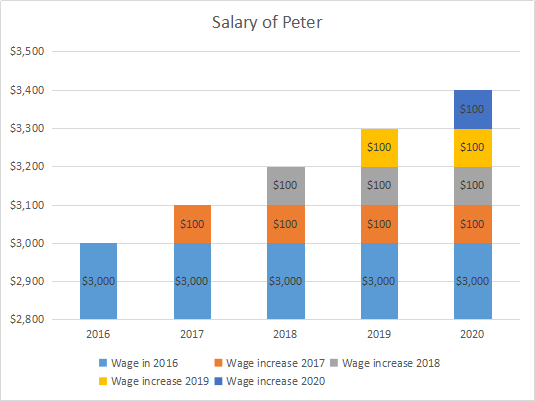 The amount of Wage Credit is described as the below table:

In 2016, you hired Peter as an employee, paying him $4,700/month. Due to his good performances throughout the years, you decided to increase his salary each year by $100/month from 2017-2020. Eventually his salary goes up to $5,100/month. The amount of Wage Credit is described as the below table: 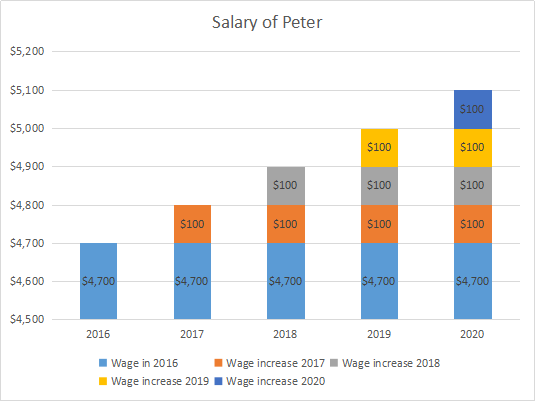 Here is the good news, you do not have to apply for anything. The IRAS will send a notification to you by post if you are eligible.

The payout or reimbursement will be sent to you by 31 March in the year immediately following the qualifying year through GIRO bank account or the bank account registered with PayNow Corporate. If you do not have any of these accounts, please register one now to receive the payout.

Although you do not have to apply for the Wage Credit Scheme in Singapore, you still should know how it works to plan ahead with your budget. Since some enhancements have been made to the scheme, these upgrades should give you some advantages to start the year of 2020.