How To Wind Up A Company In Singapore 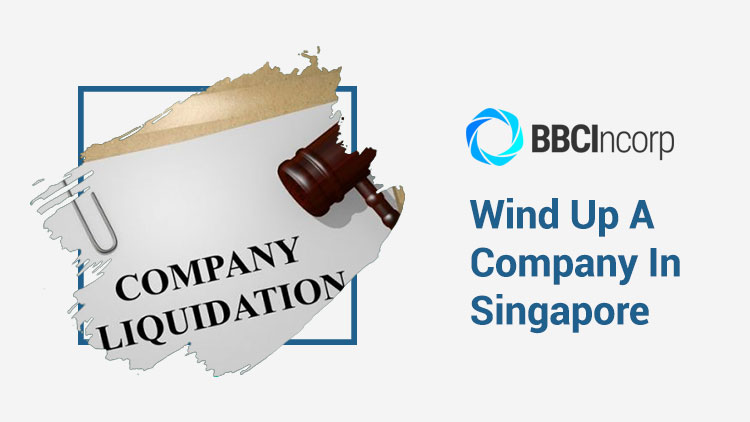 Assume that you wanted to close down your business due to all the debt it owns to creditors, you would go through a winding up in order to dissolve the company. Since there are different procedures for different situations in which you need to wind up a company in Singapore, this blog will dissect what they really are so that you can choose the most suitable one for your business.

1. What Is Company Winding Up?

One very first thing to bear in mind is that winding up and striking off is two different ways to dissolve a business.

Winding up versus Striking off

Overall, striking off a company is a less-hassle process but only applied to certain companies that are able to meet specific requirements. One of the main criteria is they have stopped running business and held no liabilities or assets.

Meanwhile, winding up a company or liquidation is the process of bringing a company to an end mainly due to indebtedness. Particularly, business’s assets are collected and converted into cash. The process makes sure that the converted value is firstly used to pay the business’s debt and then fairly distributed among shareholders if there is any remaining amount. The final result of a company winding up is the dissolution of that organization.

When is a company wound up?

One common ground for a company wound up is the inability to fulfill its debt obligation.

When a company cannot pay its debt to creditors within a given period, it becomes insolvent. With that being said, if an insolvent company is in demand to be completely shut down, it must be wound up beforehand through either “Creditors’ voluntary winding up” or “Compulsory winding up by the order of Court”.

However, a solvent company, which is able to pay debt as its total value of assets exceeds its liabilities, can also be wound up. It can only apply for “Members’ voluntary winding up”.

2. How to Wind Up a Company in Singapore

In short, there are 3 types of winding up:

Below are the overall procedures of company winding up in Singapore:

In order to proceed a winding up, a solvent company must have the ability to fully pay its creditors within 12 months after the liquidation begins.

Under some circumstances, the directors can decide to liquidate the company, for examples:

Procedure of Members’ Voluntary Winding Up

According to Division 3 of the Companies Act in Singapore, the process can be generally described as following:

I. Making Declaration of Solvency

The directors of a company must send to the Registrar (ACRA) a declaration of solvency. In such document, they must declare that:

Moreover, it is required that a statement of affairs must be attached to the declaration, stating:

II. Passing a Resolution for the Winding Up

Subsequently, notices of an Extraordinary General Meeting must be sent to the company’s members and it must be held within 5 weeks after the declaration is made. At this meeting, a Special Resolution for the company winding up shall be proposed and it must be passed by at least 75% of the votes from the members, in order to continue the process of liquidation.

After the resolution having been passed, the company shall:

According to Subdivision 2 of Division 3 of the Companies Act on Provisions applicable to Members’ voluntary winding up in Singapore, the company has to appoint at least one liquidator for winding up the business’s affairs and asset distribution.

Upon the appointment, the powers of the company’s directors are taken away. However, the liquidator may suggest and approve the continuance of the directors’ powers if it is believed to be the best for the company to do so. At this point, the winding up commences.

At any time, if the company is proven to be unable to pay the debt in full within the 12-month period mentioned above, the liquidator has the right to immediately summon a meeting of creditors. If that is the case, the winding up will then proceed as a creditors’ voluntary winding up.

As aforementioned, an insolvent company can either wind up voluntarily or compulsorily:

Due to the fact that a company is unable to continue its business by reason of its liabilities or indebtedness, it may go for creditors’ voluntary winding up.

Procedure of Creditors’ Voluntary Winding Up

The procedure is mainly carried out by the company, not the creditors and it is quite similar to that of Members’ voluntary winding up but not exactly the same. Two more steps are added to the process: Appointing a provisional liquidator and Holding a creditors’ meeting. The procedure can be generally described below:

The directors must lodge with the Official Receiver (Ministry of Law) and the Registrar (ACRA) a declaration that:

Pursuant to Section 219 of the Companies Act, after the declaration, a provisional liquidator must be immediately appointed by the directors following the declaration submission. This person shall exercise full functions and powers as a liquidator for one-month period (except the Official Receiver allows the period to be extended) or until the appointment of an official liquidator, whichever happens first.

Then, within 14 days, a notice of the provisional-liquidator appointment along with a copy of the declaration must be lodged with the Official Receiver and put on at least 4 local Singapore newspapers, one each published in the English, Malay, Chinese and Tamil languages.

The winding up starts when the declaration has already been lodged with the Registrar and a provisional liquidator has been appointed before the resolution for voluntary winding up was passed.

III. Passing a Resolution for the Winding Up

Same as that of Members’ voluntary winding up.

IV. Holding The Meeting of Creditors and Appointing a Liquidator

The meeting of creditors must be held on the same day or the following day after the meeting of the company occurs. At the meeting, the creditors shall nominate and finalize the appointment of an official liquidator, regardless of the nomination made by the company earlier if there is any.

2.2.2. Compulsory Winding Up by Order of Court

In addition to being insolvent, there may be many other reasons forcing a business to go through a winding up by the court’s order, according to Section 254 of the Companies Act, for instance:

Procedure of Winding Up by Oder of Court

According to the Company (Winding Up) Rules in Singapore, the procedure begins with the filing of Originating Summons and an affidavit, which can be applied to the Court by:

Any person wanting to oppose the Originating Summons for the winding up may file an affidavit in opposition at least 7 days before the hearing date. Last but not least, a liquidator has to be appointed by the applicant(s), with a written consent of that nominated liquidator, if a winding up order is made by the Court. In case of no liquidator is appointed, the Official Receiver shall be the liquidator.

3. Main Effects of a Winding Up

3.1. Effects of Voluntary Winding Up

Furthermore, shares cannot be transferred and the status of the company’s members cannot be altered during the winding up without the approval of the liquidator.

3.2. Effects of Compulsory Winding Up

Similarly, since the commencement of the winding up, the business shall cease to carry on and no action against company is allowed without the permission of the Court. The appointed liquidators shall begin to investigate the company’s affairs including its assets as well as liabilities and then report back to the Court. Any transfer of shares is also void unless there is a sanction of the Court.

But what if your company is not holding any liabilities or indebtedness? Then, you could aim for a much less hassle way to dissolve the business, striking off!

Should you have any further question, talk to our experts now!