Articles
Incorporation
How To Strike Off A Company In Singapore

How To Strike Off A Company In Singapore 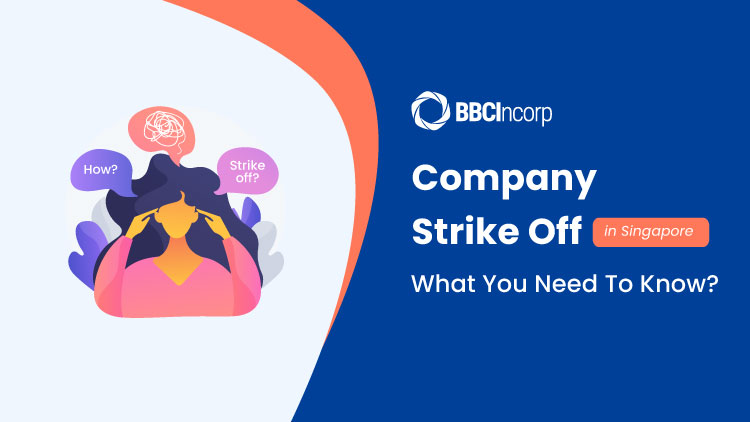 What Is the company striking off?

Striking off refers to the deregistration of a company, which includes removing the company name from the Register of Companies and completely dissolving your business.

Please remember that striking off and winding up are two different processes, although the final results are the same which is the dissolution of a company.

Striking off vs Winding up

Winding up is a more formal procedure in which a liquidator is appointed to convert assets into cash, so as to pay off debts and then distribute the remaining value to the company’s members.

In other words, winding up is the process of terminating a business due to indebtedness. That being said, if your company is insolvent, or unable to pay its debts, it must be wound up but not struck off the register.

Meanwhile, striking off is a faster and less-complicated way for a company to close down.

As simple as it appears, there are numerous criteria that must be met in order to apply for a company to be struck off.
A business can be struck off by the Registrar, which is ACRA, at their discretion or by the company itself.
Requirements of company striking off

Requirements of company striking off

ACRA requires the following criteria to be met in order to strike your company’s name:

Procedure of striking off a company in Singapore

As previously stated, you may apply to have your company struck off, or the Registrar (ACRA) may strike it off on their own initiative.

Striking off via application

If the company meets the criteria listed in the previous section, an application for striking off can be submitted online via BizFile+.

The application may be submitted using SingPass or CorpPass by:

Only if the application is approved will ACRA send a notice to the company’s directors, secretaries, and members informing them of the strike-off application.

According to Section 334A of the Companies Act, unless there is an objection, ACRA will proceed to publish the company name to be struck off in the Government Gazette, known as the First Gazette Notification, 30 days after the notice is sent.

This First Gazette Notification will state that if there is no objection within 60 days, ACRA will exercise its power to strike off the company’s name, along with reasonable evidence proving that the company should not be struck off.

Following the expiration of the 60-day period, ACRA shall publish a notice in the Gazette, known as the Final Gazette Notification, informing the company’s name has been struck off and the business will be dissolved. Normally, the entire process takes at least four months.

Restoration of the struck-off company is possible if you submit the application within 6 years of the date the company is dissolved.

Section 344C(1) of the Companies Act states that any interested party may file an objection to the striking-off as long as they can provide solid proof, such as that the company does not meet the prescribed criteria. When ACRA receives an objection, it must notify the company.

The company will then be given two months to resolve the issue, and if it fails to do so, the striking-off application will be denied. Only after the objection has been resolved can the company submit a new application.

Pursuant to Section 344B, the applicant can at any time before the company has officially been struck off withdraw the application via BizFile+ with no filing fee charged. The Registrar will then publish the withdrawal on the Authority’s website.

Striking off by the power of Registrar

According to Section 344 (1) of the Companies Act, if the Registrar has reasonable grounds to believe a company has not been operating, they can initiate the process of striking the company off the register.

From sending a notice to inform the company of the striking off to the second publication in the Gazette after which the company’s name shall be struck off, the process is similar to that described above, with the exception of the step of making an application.

Important notes after company striking off

In short, as long as the requirements are met, a company can be struck off by the Registrar or apply for striking off on its own in Singapore.

The company’s name will be struck off after two publications in the Gazette. To halt the process, an objection must be submitted to ACRA along with reasonable evidence.

Please keep in mind that if your business is in debt and wishes to close, it must go through the process of winding up rather than striking off.

Our experts can answer any additional questions you may have, so contact us right away!