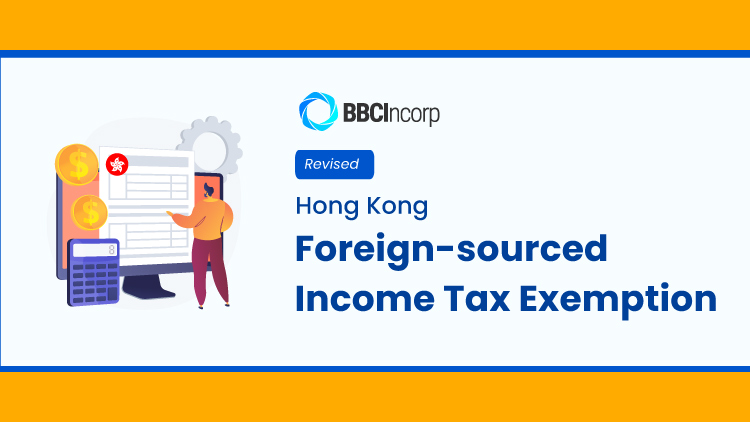 As a response to the European Union’s concerns about the non-taxation of foreign-sourced passive income not accompanied by adequate substance requirements and robust anti-abuse rules, the Hong Kong Government is set to draft the Bill to create a new Foreign-sourced Income Exemption (FSIE) regime. This Bill was gazetted on October 28 and introduced into the Legislative Council (LegCo) on November 2, 2022.

The regime is projected to come into force from 1 January 2023.

Will your enterprise be subject to the new FSIE regime?

Only members from Multinational Enterprise groups (the MNE entity) will be subject to the new FSIE regime. However, there are several exceptions to keep in mind. In particular, MNE entities that are benefiting from the existing preferential tax regimes in Hong Kong would be excluded from this regime.

What types of income are covered by the regime?

Under the new FSIE regime, specified foreign-sourced income consists of the following income arising in or derived from a territory outside Hong Kong:

It should be noted that interest, dividends, and disposal gains derived by regulated financial entities (e.g. banks, insurance companies, and SFC-licensed entities) from their regulated businesses are not affected by the regime.

In which cases will the specified foreign-sourced income be deemed to be sourced from Hong Kong, and thus subject to the Profits Tax?

There are two criteria that you should take into account:

1. The covered income is considered “received in Hong Kong” by an MNE entity carrying on a trade, profession, or business in Hong Kong irrespective of its revenue or asset size; and

2. The entity fails to meet ONE of the following prescribed requirements:

How to claim exemption from the Profit Tax Act?

The in-scope MNE entity must meet specific requirements to claim profit tax exemption in Hong Kong. Take a look at the below table and explanation for your reference.

As seen in the summary table, according to Hong Kong government’s official statements, each type of income received in Hong Kong by an MNE entity will not be taxed if and only if:

The economic substance requirement must be met for the year of assessment in which the income accrues. Be advised that ES requirements for pure holding entities and non-pure holding are not the same. Further explanations can be found here.

For foreign-sourced dividends or disposal gain

The entity can claim tax exemption if satisfying the ES requirement for the tax year in which the income is earned. Alternatively, it can also choose to meet the participation exemption regime.

The participation exemption applies only to Hong Kong residents or non-Hong Kong residents with a permanent establishment in Hong Kong who hold at least 5% of the shares or equity interest in the investee company for at least 12 months before dividends or disposal gains are accrued. There are several main rules to apply for this exemption, please feel free to refer here for more details.

The profit tax of MNE entities having IP income generated outside Hong Kong can claim an exemption only if the Nexus requirement is satisfied.

This requirement was based on the nexus approach adopted by The Organisation for Economic Co-operation and Development (OECD). It was built as a minimum standard for evaluating whether preferential tax regimes for IP income applied in tax jurisdictions are harmful.

A notable refinement to the nexus requirement by the new Hong Kong FSI regime is that the expenditures contributing to a beneficiary’s income are directly related to the benefits (the income) they receive. Accordingly, the entity can have a particular portion (the “excepted portion”) of the income arising from qualifying IP income* in respect of qualifying R&D activities exempted following the Nexus ratio**

* Qualifying IP income means the income derived from the use of, or a right to use, “qualifying intellectual property”, i.e., a patent granted under the Patents Ordinance or copyright subsisting in software.

** The Nexus ratio is the term used to calculate the tax deduction amount that a qualifying R&D expenditure contributes to an IP asset’s overall costs.

What should MNE entities prepare?

After the Bill comes into force, the in-scope MNE entities would be obliged to comply with the reporting requirements about their specified FSI if applicable. Therefore, the taxpayers/companies in Hong Kong are encouraged to update the requirements and fulfill all related duties such as the ES requirements corresponding to their circumstances.

If your company requires any further information on this issue, make sure to contact your legal expert to know how to determine your entity’s source of profits from Hong Kong and come up with the correct compliance timeline.

Certain modifications under the FSIE regime seek to ensure that Hong Kong remains an ideal incorporation hotspot for investors around the globe. This will allow the jurisdiction to enhance tax stability and maintain tax competitiveness while addressing the EU’s concern of compliance with cross-border tax avoidance arising from double non-taxation. From the Hong Kong foreign-sourced income taxpayers’ side, the city has also proposed measures to reduce the burden of tax compliance on corporations.

It is important to know that the new policies are expected to come into force starting 1 January 2023, and BBCIncorp will constantly keep you updated to help maintain your company in good standing.

Licensed to use trademark by the trademark owner - BBCincorp Pte. Ltd.