Articles
Delaware
What Officers Are Required for a Delaware Corporation?

What Officers Are Required for a Delaware Corporation? 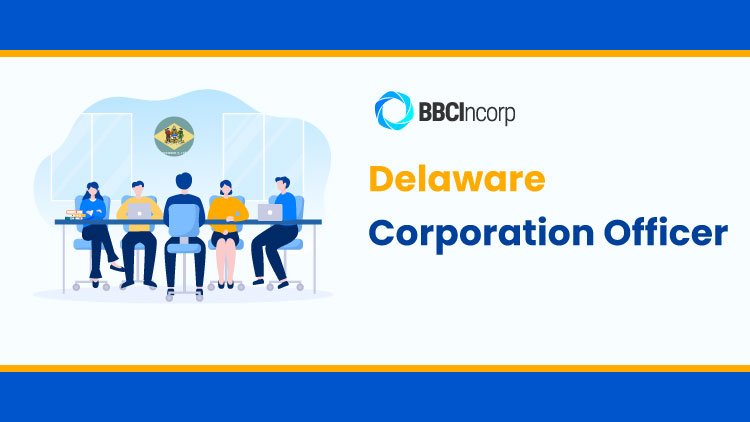 The directors and officers play critical roles in the management of a corporation. The former sets the overall direction and participate in the fundamental decisions of the corporation, while the latter manages the hands-on, day-to-day operations.

According to the Delaware General Corporation Law (DGCL), your corporation must have at least one officer who has the duty to record the proceedings of the stockholder’s and director’s meeting.

The DGCL does not name the officers or define their duties specifically. However, traditional officers of a corporation normally include the president, a secretary, and a treasurer.

Continue reading for an overview of Delaware officer positions and how they fit into your company’s overall structure.

What is a Delaware corporation officer?

A Delaware corporation officer refers to an individual who is elected to a management position within your company. So, the officers are in charge of carrying out the board’s directives and ensuring that the company meets its objectives.

Officers are classified into three types: executive, management, and administrative.

Executive officers or presidents are responsible for making high-level decisions, as well as executing contracts.

How do officers fit into the structure of your corporation?

The hierarchy of a corporation consists of three key roles to ensure accountability, including shareholders, directors, and officers.

Shareholders are the owners of the company and have the final say in corporate decision-making. They elect the directors, who are responsible for setting the strategy and direction of the company. The directors, in turn, appoint the officers to run the day-to-day operations of the corporation.

The officers play a significant role in business management, carrying out daily tasks, reporting to the board of directors, and overseeing specific business functions.

For instance, a Chief Financial Officer (CFO) is responsible for the financial health of the company, while a Chief Marketing Officer (CMO) manages the overall marketing functions.

The three roles do not have to be filled by different people. In fact, any person can fill all three positions. If you have just started a corporation and do not have any shareholders yet, you can serve as the shareholder, director, and officer all at once. Yet, it’s good practice to have designated personnel for each specific role.

Delaware is not intent on replacing directors and simply needs a list of current directors when the annual report is submitted. Any change of officers is purely internal to the corporation and does not necessitate the filing of a formal modification with the state of Delaware. Certain transactions, such as opening a bank account, may necessitate the use of Certificate of Incumbency Delaware, which is a formal corporate document that lists each member of the business and their role.

What are the main roles of Delaware corporation officers?

The officers of a Delaware corporation have various responsibilities that differ based on the company’s size and structure.

In a small business, the CEO may be in charge of various tasks such as compliance, finance, operations, and management, whereas a large corporation may have multiple officers, each with a specific focus.

You have complete discretion over which officers to appoint for your corporation and their specific roles, but there are a few important responsibilities to keep in mind:

Record meeting minutes: Under Delaware law, you must appoint one officer whose sole responsibility is to record and maintain the minutes of stockholder and board meetings (i.e., the secretary).

Sign stock certificate: Stock certificates in Delaware must be signed by two officers who are authorized to do so. You can sign as both officers if you hold multiple officer roles.

Corporation governance is relatively complex and involves a wide range of stakeholders, from shareholders to directors and officers. It’s important to have a clear understanding of the roles and responsibilities of each before making any decisions.

How many officers does a corporation require?

At least one officer is required, but you can have as many officers as you want.

Does a Delaware corporation need officers?

According to Section 142 of the Delaware General Corporation Law (DGCL), every corporation formed under the chapter shall have an officer with titles and duties stated in the bylaws.

What are the 4 main officers of a corporation?

The four main officers of a corporation are the president, vice president, secretary, and treasurer.

Can anyone be an officer of a corporation?

Yes, anyone can be an officer of a corporation. There are no requirements in terms of age, education, or experience. However, it is important to note that officers have fiduciary duties to the corporation and its shareholders.

How do I add an officer to a Delaware corporation?

If you need to add an officer to your Delaware corporation, you will first need to amend your company’s bylaws. Once the bylaws have been amended, you can appoint the new officer by resolution of the board of directors.