Articles
Tax & Compliance
Company Liquidation: How To Wind Up In Singapore?

Company Liquidation: How To Wind Up In Singapore? 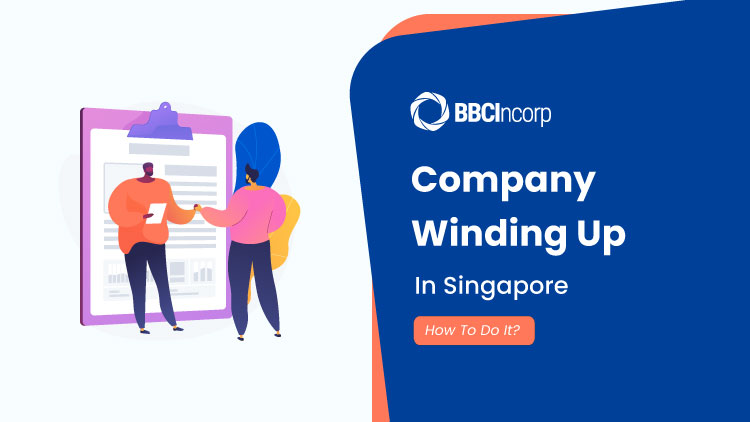 Assume that you wanted to close down your business due to all the debt it owes to creditors, you would go through a winding up in order to dissolve the company. Since there are different procedures for different situations in which you need to wind up a company in Singapore, this blog will dissect what they really are so that you can choose the most suitable one for your business.

What is the company winding up?

Winding up a company, also known as liquidation, is the process of closing a business due to debt.

Business assets, in particular, are collected and converted into cash. The process ensures that the converted value is first used to pay off the company’s debt before being fairly distributed among shareholders if any money remains.

The final result of a company winding up is the dissolution of that organization.

When is a company wound up?

One common ground for a company wound up is the inability to pay its debt.

Insolvency occurs when a company is unable to pay its creditors within a specified time frame.

That being said, if an insolvent company is required to be completely shut down, it must first be wound up through either “Creditors’ voluntary winding up” or “Compulsory winding up.”

A solvent company, on the other hand, can be wound up if its total value of assets exceeds its liabilities. It can only be used for “Members’ voluntary dissolution”.

How to wind up a company in Singapore?

In short, there are 3 methods of winding up:

This method is only used on solvent companies when all members agree to voluntary liquidation.

The winding up of a company is done in accordance with Singapore Companies Act (Chapter 50) and winding up rules.

Creditors’ voluntary winding up occurs for insolvent companies when shareholders decide that they can no longer pay off debts and creditors agree to wind up the company.

The winding up is carried out in accordance with Chapter 50 of the Singapore Companies Act and the winding up rules.

This procedure also applies to insolvent companies when either creditors or shareholders file a winding-up petition or order against the company, depending on the circumstances.

The following sections are the general procedures for a company winding up in Singapore.

To proceed with a winding up, a solvent company must be able to fully pay its creditors within 12 months of the liquidation beginning.

The directors may decide to liquidate the company in certain circumstances, such as:

According to Division 3 of the Companies Act in Singapore, the process is defined as follows:

A company’s directors must submit a declaration of solvency to the Registrar (ACRA). In such a document, they must declare that:

A director who declares a decision without reasonable grounds may face a $5,000 fine, a 12-month prison sentence, or both.

Furthermore, a statement of affairs must be attached to the declaration, stating:

Following that, notices of an Extraordinary General Meeting must be sent to the company’s members, and the meeting must be held within 5 weeks of the declaration.

A Special Resolution for the company’s winding up shall be proposed at this meeting, and it must be passed by at least 75% of the votes cast by the members in order to continue the liquidation process.

Following the passage of the resolution, the company must:

According to Subdivision 2 of Division 3 of the Companies Act on Provisions applicable to Members’ voluntary winding up in Singapore, the company must appoint at least one liquidator to wind up the business’s affairs and distribute assets

Upon the appointment, the powers of the company’s directors are revoked. However, the liquidator may propose and approve the continuation of the directors’ powers if it is believed to be in the best interests of the company. The winding up begins at this point.

If the company is unable to pay the debt in full within the 12-month period mentioned above, the liquidator has the right to call a creditors’ meeting immediately. If this is the case, the winding up will be carried out as a creditors’ voluntary winding up.

If a company is unable to continue operations due to its liabilities or indebtedness, it may seek creditors’ voluntary winding up.

The procedure can be generally described below:

The directors must file a declaration with the Official Receiver (Ministry of Law) and the Registrar (ACRA) stating that:

According to Section 219 of the Companies Act, the directors must immediately appoint a provisional liquidator following the declaration submission.

This person will have full functions and powers as a liquidator for one month (unless the Official Receiver extends the period) or until the appointment of an official liquidator, whichever comes first.

The provisional-liquidator appointment notice, along with a copy of the declaration, must then be lodged with the Official Receiver and published in at least four local Singapore newspapers, one each in English, Malay, Chinese, and Tamil.

The winding-up process begins when the declaration is filed with the Registrar and a provisional liquidator is appointed before the resolution for voluntary winding-up is passed.

Same as that of Members’ voluntary winding up.

Step 4: Holding the meeting of creditors and appointing a liquidator

The creditors’ meeting notices must include the following information:

The creditors’ meeting must be held on the same day or the next day after the company meeting.

The creditors will nominate and finalize the appointment of an official liquidator at the meeting, regardless of any earlier nomination made by the company.

Compulsory winding up by order of court

In addition to insolvency, many other factors may force a business to liquidation by court order, according to Section 254 of the Companies Act, such as:

The procedure in Singapore begins with the filing of an Originating Summons and an affidavit, which can be applied to the Court by:

Anyone who wishes to object to the Originating Summons for the winding up may do so at least 7 days before the hearing date.

Last but not least, if the Court issues a winding-up order, the applicant(s) must appoint a liquidator, with the liquidator’s written consent. If no liquidator is appointed, the Official Receiver will serve as liquidator.

What happens after the company winds up

When the liquidation process begins, the company must cease operations unless the liquidator believes it is beneficial to the winding up.

With the consent of the liquidator, the corporate power can continue until the company is dissolved.

Furthermore, without the approval of the liquidator, shares cannot be transferred or the status of the company’s members changed during the winding up.

Similarly, since the start of the winding up, the business has ceased operations, and no action against the company is permitted without the Court’s permission.

The liquidators will begin investigating the company’s affairs, including its assets and liabilities, and will then report back to the Court. Any transfer of shares is also null and void unless sanctioned by the Court.

(3) Compulsory winding up by order of court

What if your company has no liabilities or indebtedness? Then, you could aim for a much less time-consuming method of dissolving the business, such as striking off.

Should you have any further questions, talk to our experts now!