A General Guide To Winding Up Of Hong Kong Companies 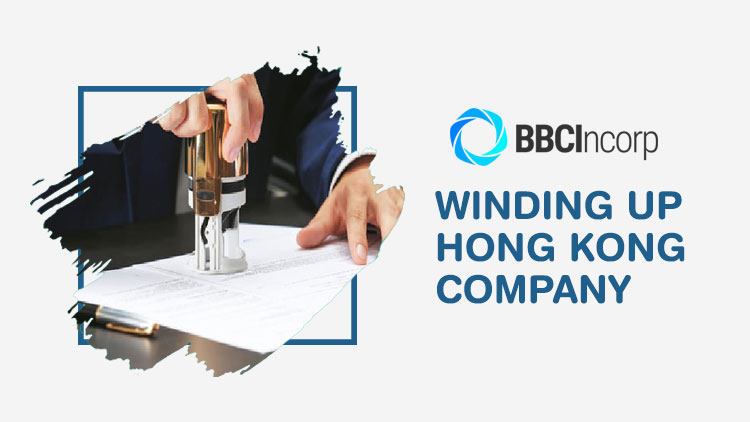 Given the complexities entailed, dissolving a company in Hong Kong by winding up should be thoroughly aware before the application. The below article casts light on the winding up of Hong Kong companies and its different options!

1. An overview of winding up a company in Hong Kong

A company in Hong Kong can come up with closing down its business by two popular options, namely De-registration and Winding up.

Despite the fact that both can lead your Hong Kong company to dissolution, their procedure and feature bear some striking differences that should carefully be considered to ensure the suitability of your company’s circumstances.

Deregistration is widely chosen by many companies in Hong Kong since it allows a streamlined and cost-effective process for the company dissolution in Hong Kong. By contrast, winding up is the legal process by which all the assets of a Hong Kong company are sold off and converted to cash to reimburse debts.

For better insights into differences between winding up and deregistration, read our blog Hong Kong Company Deregistration Guide

In Hong Kong, the company winding up is regulated by the Companies Ordinance Cap. 32 and Companies Rules Cap 32H.

Please note that only a limited company is granted winding up in Hong Kong.

Need an a-to-z guide to doing business in Hong Kong?
This e-book provides you with the latest information about: 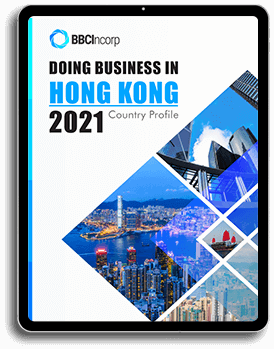 2. Types of winding up a company in Hong Kong

Voluntary winding up in Hong Kong can be done by creditors or shareholders of the company.

A limited company in Hong Kong may consider the shareholders’ voluntary winding up if its directors think that the company is solvent – in other words, it has the ability to fully pay the debts during 12 months from its winding-up commencement.

The role of the liquidator is to be concerned with the company affairs and file notifications regulated by the Companies Ordinance. Importantly, the liquidator takes responsibility for holding annual general meetings to keep relevant members updated on the process.

Note: The winding-up process will commence from the date of the special resolution passed.

In the event that the company is unable to make a Declaration of Solvency, the company can choose to close down with creditors’ voluntary winding up.

The winding-up procedure is quite similar to that of shareholders. Note, however, that after the passing of the winding-up resolution, the company needs to hold the creditors’ meeting. During the meeting, the creditors will nominate a liquidator as well as an inspection committee whose role is to supervise the power performance of the liquidator.

To proceed with the creditors’ voluntary winding up, directors are required to present a full statement of the company affairs, together with a list of creditors and the estimated amount to their claims before the above meeting.

2.2. Compulsory winding up by Court

Below chart illustrates Hong Kong winding-up procedure in the most easy-to-follow manner: 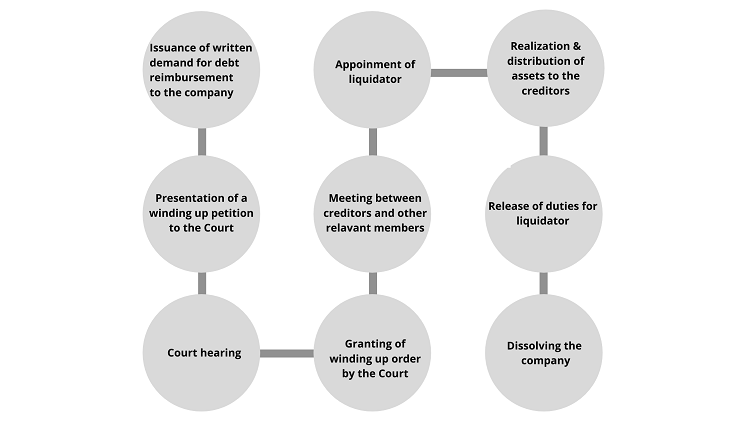 Pursuant to the Companies (Winding Up and Miscellaneous Provisions) Ordinance Cap.32, a Hong Kong limited company winding up by the Court can take place under the following circumstances:

A creditor, a shareholder or the company to whom the Hong Kong limited company is indebted can deliver a winding-up petition against the company, as regulated in Section 177 and 178 of Companies Ordinance Cap 32.

The winding-up petition must be prepared in accordance with the Companies Winding Up Rules (Cap 32H), key requirements of which are:

The appointed provisional liquidator is liable for interviewing the company’s directors and instructing them on preparing the statement of affairs. The liquidator also takes control of the realization and disposal of the entity’s assets and proceed with investigations.

If there are no more realizable assets as well as further investigations that should be conducted, the liquidator can make an application for release to the court.

In case the private practitioner acts as the liquidator, then the company can be completely brought to an end on the date of the order issued from the court. In another circumstance which is the Official Receiver plays the role of the liquidator, a certificate in the specified form must be delivered to the Registrar, and the company will be dissolved two years later.

Typically, there is no property transfer allowed after the presentation of a winding-up petition has been made. The company account would also be made frozen by banks.

Note: At the time of the winding-up petition is filed in the court, the compulsory winding-up will be deemed to commence.

The complexity of the winding-up procedure is quite obvious. It is advised that you should engage professional experts before opting for these processes!

3. Effects of winding up process

3.1. Effects of voluntary winding up

After the voluntary winding up is put on commencement:

3.2. Effects of compulsory winding up

In case of the compulsory winding up, from the commencement of this procedure:

To sum up, there are two common ways for a company to wind up in Hong Kong: Voluntary and Compulsory winding up. Compared to other methods, the winding up of Hong Kong companies is considered to be more complicated with respect to the statutory requirements and number of steps of each type.

If your limited company in Hong Kong is seeking winding up options to close down, it is recommended that you should engage a trusted corporate service firm/professional expert in the area to guide your winding-up process smoothly. And BBCIncorp can help you, let’s check our company dissolution and restoration service for more details!

How To Kick-Start Your E-Commerce Business In Hong Kong

Choosing Hong Kong for an eCommerce Business: Is It Right?