Resign Or Remove Directorship From Company In The UK 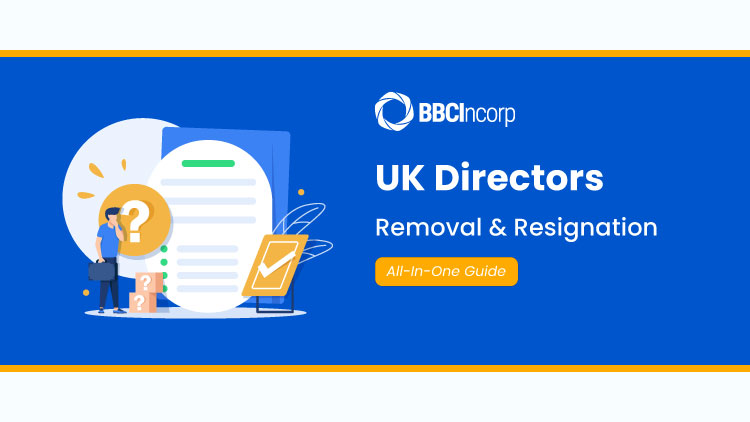 Directors are critical members of a company, making major management decisions and being accountable for the company’s growth and success. They are responsible for handling business affairs and are bound by strict legal obligations to act in the company’s best interests.

If the directors fail to meet their duties or are unable to continue performing certain roles, there may be no alternative option for the company other than to seek the removal of such a director.

Whether you’re looking to resign a directorship or remove another director, understanding the process is critical to avoid trouble.

What to know about director removal in the UK?

A company can choose to remove its director using several methods. However, the resignation or termination method must adhere to the terms outlined in the Companies Act of 2006, the articles of association, the shareholders’ agreement (if applicable), and any service agreement between the director and the business.

When the sole director resigns or is terminated from his or her position, there must be at least one natural director appointed at all times. Below is the list of common removal methods:

Removal following the articles of incorporation

The company can remove its directors under the provisions of the Articles of Incorporation, which include the following circumstances:

In many companies, the power to remove a director is granted to the shareholders under the company’s articles of incorporation, through the serving of written notice on the director in question.

For companies that do not include such powers in articles of incorporation, section 168 of the Companies Act 2006 provides a statutory procedure that allows shareholders to remove a director at a general meeting, by passing an ordinary resolution with a majority vote (more than 50%).

If a majority vote is obtained, the termination of the director must be reported to Companies House within 14 days.

A company director can be disqualified by the Court, Companies House, HMRC, the Competition and Markets Authority, and authorities such as the Financial Conduct Authority, or a company insolvency practitioner if he or she fails to maintain the statutory duties and responsibilities.

The director will be disqualified under the circumstances:

How to remove a company director?

A specific procedure must be followed to remove a director from office, which is summarized in the 6-step process below:

The shareholders must provide a Special Notice of their intent to remove the director.

The notice must be given at least 28 days before the general meeting at which the director removal vote is held.

Step 2: Notice to the company’s member

Once the Special Notice is approved, the company must notify all members/shareholders of the director’s removal at least 14 days before the shareholders’ meeting.

Following notification of the removal decision to the shareholders, the company must send an intimation (i.e., a hint or an indirect suggestion) to the proposed director to be removed from the company’s board.

The most important step is to hold a general meeting to vote on the proposed director’s dismissal.

During the meeting, the concerned director is given the opportunity to be heard before being removed from the company’s management and control board.

The removal vote may be conducted by a simple show of hands or a poll vote, with the removal vote being successful if more than 50% of shareholders present vote in favor of removal.

Step 5: Notify the Companies House of the removal

To notify Companies House of the meeting’s conclusion, the company must file form TM01 within 14 days of the date of effective termination.

If the director has significant control (more than 25% of voting shares), the company must also submit a PSC07 form.

Companies can file for director removal with Companies House in three ways: online, by mail, and in person.

You can easily access the TM01 form by going to the official website, logging in, and filling out the necessary information.

If you are unfamiliar with the online filing system, filing documents in hard copy is a viable option. You must download and print the TM01 form, fill it out with the required information, and mail it to Companies House at the address provided on the form.

If you find it difficult to remove and change the director of a UK company on your own, you may want to seek professional assistance from a company like BBCIncorp UK, which can help you do so in a seamless and simple manner.

The company needs to fill the important vacancy simultaneously with the removal by filing relevant documents with Companies House to appoint new directors.

What to know about voluntary resignation in the UK?

When a company director wishes to resign from his or her position within the terms of the contract, this is known as a voluntary resignation. This could be due to retirement, relocation, or a desire to seek out new business challenges.

If you’re planning for voluntary resignation, it’s important to be thorough at every step of the way.

The process of resigning as a director

Consult the relevant contracts, agreements, and Articles of Association to ensure that you follow the agreed-upon terms for resignation.

If there are no defined terms on this, you should consider having a legal advisor to help you assess the most appropriate course of action. This is extremely important to avoid unfair dismissal, future complications, or disputes.

If there are any disputes or claims against the director, you could take legal advice before serving your notice or invoke any procedures under the Companies Act 2006 or the articles of association.

If there are any director’s loans available, either made from you to the company or vice versa, you should settle them prior to departure.

You should notify your co-directors and shareholders of your resignation.

This should ideally take the form of a written notice in which you state your intention to resign and the date on which you intend to do so.

Within 14 days of your resignation, you must file a TM01 form with Companies House, along with any other required documents or information (if any).

The form must include the following information:

The resignation takes effect from the date on which it is notified to Companies House. You’ll need to ensure that the register of the new directors is up to date.

Will resigned directors still be linked to the company?

Following the resignation, the director is relieved of all company responsibilities; he or she will no longer have access to key company financial information or the ability to make decisions about how the company should be run.

If the company runs into financial difficulties in the future, the resigned director will be unaffected because he or she is no longer liable to the company.

The resigned director’s information will still be available on the Companies House website. It will, however, be marked as “resigned” rather than “active.”

Nonetheless, there are circumstances in which the director may remain involved in the affairs of the company after resigning. We’ve included some examples below:

A shadow director is someone who has vested interests and influence in the business but does not hold an official position within the company.

In the event that something goes wrong, a company’s shadow director can still be investigated and held liable after their resignation.

If the director has previously provided personal guarantees to allow the company to borrow money, he or she may still be liable after resignation if the company fails to make loan repayments to the lender.

If a company declares bankruptcy, the conduct of its directors over the previous three years may be investigated, regardless of whether they resigned during that time.

This means a resigned director could face legal consequences if failing to fulfill his/her duties as a director.

Can a company fire a director who holds shares?

The decision to fire a director is greatly governed by the bylaws of your company. For example, the bylaws may state that any director could be fired for performing poorly, regardless of whether he or she does own a significant portion of the company.

Even if the director cannot be fired, they can be forced to resign under specific circumstances, such as bankruptcy, breaching of contracts, or conducting illegal activities.

Depending on the specific regulations, the director may be forced to sell their shares as well.

When the company needs to remove a director from his or her position, there are many things that need to be noticed and considered regarding resigning directorship. Companies need to follow predefined terms and procedures such as the Companies Act 2006 to avoid any pitfalls and ensure they fully comply.

If you are not sure about resigning directorship in the UK, get in touch with BBCIncorp and we can help advise you on this removal and file documents for you.